That Friday, Nov. 22, 1963, I was in Mrs. Riles' geography class. She stopped and went to the door. I heard her wail. "The President's dead," she said, "and there's a Southerner in the White House. What's going to become of us now?"

School was dismissed. We got in the car and headed to my grandmother's house, [and when asked how I felt], I said I was very sad. "And scared," I added. Mrs. Riles had given me a reason.

I doubt if many children outside the South would have described their reaction to his death as fear.

Fortunately, though Lyndon Johnson was a southerner, he carried through on Kennedy's promise to end segregation. As a political scientist, I have read scores of academic papers on Johnson's legislative approach. Some believe that Johnson was able to do what Kennedy could not have: assemble a coalition of northern Democrats and liberal Republicans to ram through landmark legislation. 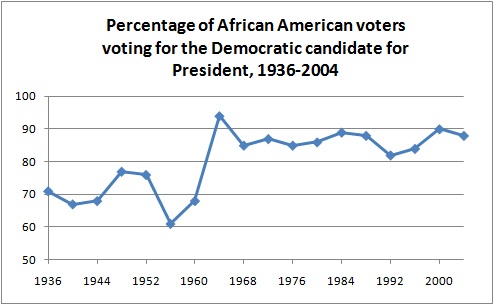 The Democratic domination of the African American vote really did not begin until 1960, when Kennedy dramatically called Coretta Scott King, the wife of Dr. Martin Luther King, after her husband was sent to prison in Georgia. On Election Day, blacks showed their appreciation by voting for Kennedy by a margin of 70-30, more than enough to give the Democrat the victory over Richard Nixon.

In 1964, the black preference for the Democrats became a landslide, as president Lyndon Johnson rallied a grieving nation after Kennedy's assassination to demand passage of the strong civil rights bill JFK had proposed during his last year in office. Backed by a national outcry, Johnson jammed through the far-reaching legislation, which ended discrimination against blacks in virtually every area of national life. Ironically, it was only with strong Republican support that the bill was able to pass.

In March 1961, Pres. Kennedy established the President's Committee on Equal Employment Opportunity (PCEEO), to end discrimination in federal employment. Every federal government contract included the provision to "not discriminate against any employee because of race, creed, color, or national origin. The contractor will take affirmative action, to ensure that applicants are employed and that employees are treated during employment, without regard to their race, creed, color, or national origin.
Source: They Think You're Stupid, by Herman Cain, p. 23-24 , Jun 14, 2005

We should not counsel patience and delay on equal rights

In 1963, Pres. Kennedy put the full power of the federal government on the side of those seeking integration because it was the right thing to do. When he mobilized the Alabama National Guard to admit two black students to the University of Alabama under federal court order, Pres. Kennedy said, "We are confronted primarily with a moral issue. The heart of the question is whether all Americans are to be afforded equal rights and equal opportunities, whether we are going to treat our fellow Americans as we want to be treated. If an American, because his skin is dark, cannot eat lunch in a restaurant open to the public, if he cannot send his children to the best public school available, if he cannot vote for the public officials who represent him, if, in short, he cannot enjoy the full and free life which all of us want, then who among us would be content to have the color of his skin changed and stand in his place? Who among us would then be content with the counsels of patience and delay?"
Source: Profiles In Courage, Intro by Caroline Kennedy, p. xi-xii , Mar 18, 2003

Sporadic instances of courage on isolated and unimportant issues have no great significance. To be important, courage must be exhibited on behalf of some large cause or rule. John Stuart Mill made a brave fight in Parliament against the martial law cruelties of Governor Eyre in Jamaica. He did it, as he points out in his autobiography, not from a mere feeling of humanitarian sympathy with maltreated Negroes, but to maintain the sacred principle that British subjects everywhere were under the rule of civil law, not of military license. Senator Foraker, bravely intervening on behalf of the 160-odd Negro troopers dishonorably dismissed from the service after the Brownsville Affair, declared that he also was defending a greater cause than that of a few soldiers; the cause of a fair trial.
Source: Profiles In Courage, by Sen. John F. Kennedy, p. xii-xiii , Mar 18, 2003

Push to register black voters to help Democrats in 1964

The Kennedys were unquestionably eager to see more blacks registered to vote. But anyone with the dimmest knowledge of contemporary affairs understood that virtually every new black voter helped the Democrats. Above all Jack and Bobby wanted to quell the turmoil that threatened to disrupt the entire nation and thus destroy their administration.

The summer of 1963 proved to be as strife-ridden as many had feared. Justice Department records showed 978 demonstrations in 209 cities in the period from May 20 to August 8. No doubt responding to the turbulence, Congress seemed more favorable toward civil rights legislation than many had thought.

By late November considerable doubt remained among political observers whether or not the compromise [civil rights] bill would win approval on Capitol Hill. Bobby later admitted that the Senate was a major hurdle.

One Senator, a personal friend of Jack's, said later that the bill would not have passed if the president had lived.

The initial civil rights strategy of the Kennedy Administration had its positive side. The federal government was encouraged to hire blacks. Quiet efforts were made to integrate public schools. The Justice Department worked to ensure voting rights, an activity that, as one scholar has noted, "risked the least political capital." On the other hand, executive orders were not issued as promised, and legislation was placed on the back burner. The attorney general concurred with the view of J. Edgar Hoover (himself violently opposed to the civil rights movement) that the federal government lacked the legal authority to protect civil rights workers. All over the South activists were beaten at will while FBI agents looked the other way.
Source: A Question of Character, by Thomas Reeves, p.338 , Dec 10, 1997

On Oct. 19, a group of 75 African-Americans had politely asked for service at the Magnolia Room in Rich's, the grand Atlanta department store. It was a whites-only restaurant. Among those arrested and charged with trespassing was the Reverend Martin Luther King, Jr. While the other participants in the sit-in were soon released, a judge denied King bail, sentencing the civil rights leader to 6 months at hard labor.

Coretta Scott King feared with good reason that her husband, a black man, might not get out of jail alive. Despite his yearning for the continued confidence of the conservative southern Democrats, Kennedy made the call [to Coretta]. From Mrs. King, the press quickly learned about John Kennedy's expressions of sympathy. Robert Kennedy called the judge who had sentenced King to ask for his release on bail. His mission was successful.

Nixon, meanwhile, was silent. For his failure to act, Nixon would pay dearly. Black America moved overnight to the Democratic side of the ballot

A lack of adequate education is one root of other Negro problems, the President said, and the implementation of the Supreme Court's decision cannot be left solely to those who lack the resources to bring suits or withstand intimidation. "The pace is very slow. To many Negro children entering segregated grade schools at the time of the Supreme Court's decision nine years ago will enter segregated high schools this fall, having suffered a loss which can never be restored. "
Source: "Kennedy" by Ted Sorensen, p. 497-498 , Jan 1, 1965

Kennedy pressed for action [on civil rights for African-Americans] from clergymen of all faiths, certain they would "recognize the conflict between racial bigotry and the Holy Word." What about racial intermarriage? Asked one minister. "I am not talking about private lives," replied the President, dismissing the familiar bugaboo, "but public accommodation, public education, and public elections."

The overall response made Kennedy proud of his country. The citizen "lobby"--led by religious groups--was massive and effective. Even more striking was the voluntary removal of segregation signs and practices in chain stores, theaters and restaurants.

The nation's clergy were goaded into effective action on a major moral issue which had long preceded Kennedy's leadership. Progress was slow and insufficient, but, compared to the previous 100 years, rapid and gratifying.

Kennedy had collaborated with the movement for civil rights in the 50s. In the 1957 fight, he had supported Title III of the civil rights bill. In the late 50s civil rights advocates regarded him as sympathetic. Most civil rights leaders preferred Humphrey or Stevenson for the Democratic nomination.

[JFK accepted] the belief that the untapped resources of executive action offered the best immediate hope for new civil rights progress. Kennedy liked this approach both because it fitted his conception of an activist Presidency and because in 1957 and 1960 civil rights debates had left him pessimistic about further progress in Congress.

The Irish were the first to endure the scorn and discrimination later to be inflicted, to some degree at least, on each successive wave of immigrants by already settled "Americans." In speech and dress they seemed foreign; they were poor and unskilled; and they were arriving in overwhelming numbers. The Irish are perhaps the only people in our history with the distinction of having a political party, the Know-Nothings, formed against them. Their religion was later also the target of the American Protective Association and, in this century, the Ku Klux Klan.

The Irish found many doors closed to them, both socially and economically. Advertisements for jobs specified: "No Irish need apply." But there was manual labor to be done, and the Irish were ready to do it.